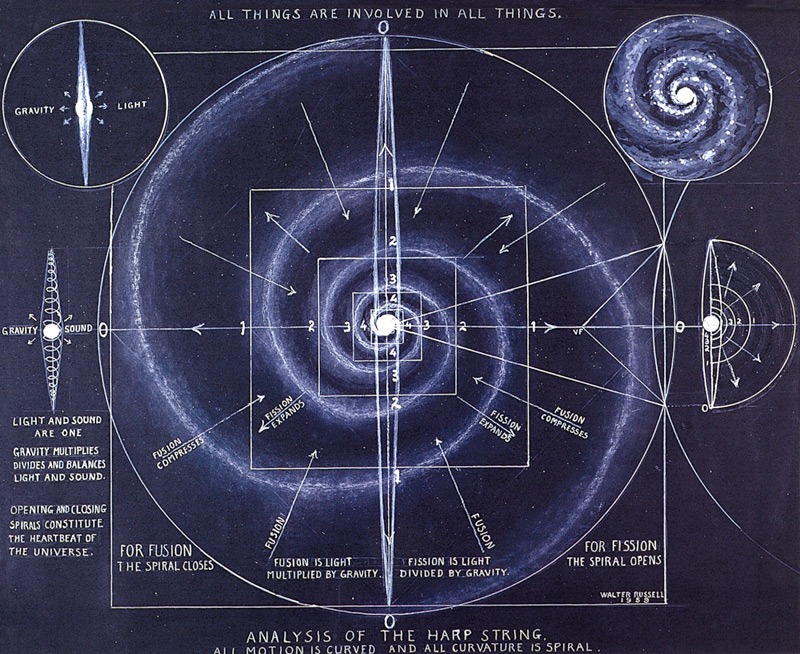 Looking at the drawings of Walter Russell is utterly intriguing and confusing at the same time. Because you’re presented with information that is neither merely artistic nor does it comply with the realm of science. But what do these two words mean anyway? Walter Russell had a vision, how accurate this vision describes reality, I can not tell. And I don’t approach such a man’s work with the demand for accuracy to an existing model of the world.

Russell was a visionary, a true Renaissance man — painter, sculptor, architect, musician, and author. But he had no background in science. His cosmogony is based on a revelatory event he experienced at the age of fifty. Later he wrote, “It will be remembered that no one who has ever had the experience of illumination has been able to explain it. I deem it my duty to the world to tell of it.”

Nikola Tesla had a high opinion of Russell’s Electromagnetic Wave Universe but told him that mankind was not ready for it. Furthermore, Russell’s concepts contain striking similarities with the observations of Viktor Schauberger, and their visual presentation bears an obvious resemblance to Paul Laffoley.

The keystone of the entire structure of the spiritual and physical universe is Rhythmic Balanced Interchange between all opposites.Walter Russell